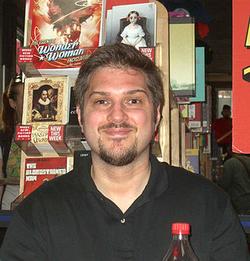 Christos Gage is a Greek-American screenwriter and comic book writer. He is known for his work on the television series Daredevil, Law & Order: SVU, and Numbers. His comic works include Angel & Faith, Avengers Academy, The Amazing Spider-Man and The Superior Spider-Man.