Dick Ayers was an artist and cartoonist. He was best known for his work with Jack Kirby during the Silver Age, including early works of the Fantastic Four. He was the signature penciler for Sgt. Fury and His Howling Commandos for 10 years, and co-created the Ghost Rider. He was inducted into the Eisner Hall of Fame in 2007. 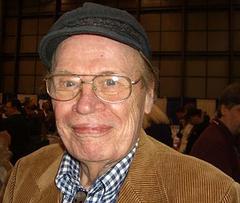