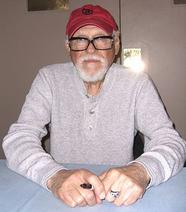 Gene Colan was an artist, best known for his work with Marvel on Daredevil, Howard the Duck, and The Tomb of Dracula. He co-created the Falcon and Blade. He was inducted to the Eisner Hall of Fame in 2005. He died in 2011.