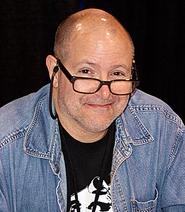 Mike Mignola is an artist and writer. He is best known for creating and writing Hellboy. He has worked on animation projects like Atlantis: The Lost Empire and the screenplays for the Hellboy (2004) film and the 2008 sequel and the 2018 reboot.