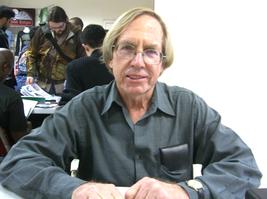 Roy Thomas is a writer and editor. He was the first to succeed Stan Lee as Editor-in-Chief at Marvel. He is best known for introducing Conan the Barbarian to American audiences and revamping Golden Age comics, e.g. Justice Society of America. He wrote Sgt. Fury and his Howling Commandos and eventually took over The Avengers. Thomas co-created several characters including Ultron, Carol Danvers, Ghost Rider, Iron Fist and Adam Warlock. AS Editor-in-Chief, he launched titles like The Defenders, What If and the Star Wars comic adaptation