Silvio "Sal" Buscema is an artist, primarily for Marvel Comics. He is best known for his ten-year run on The Incredible Hulk and penciling a 100-issue run on The Spectacular Spider-Man, which included the iconic death of Harry Osborn.  He also happens to be the younger brother of the comics artist John Buscema. 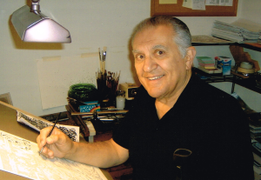