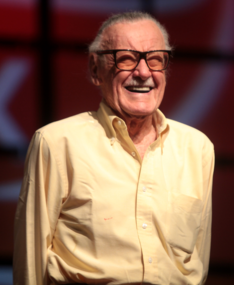 ​Stan Lee is a comic book writer, editor and current producer. With many artists, most notably Jack Kirby and Steve Ditko, he created popular heroes like Spiderman, the Hulk, the Fantastic Four and many others. He lead the expansion of Marvel Comics Co. to its current size. He was inducted into the comic book industry's Will Eisner Award Hall of Fame in 1994 and the Jack Kirby Hall of Fame in 1995. Lee received a National Medal of Arts in 2008. Although he is retired, you can see Lee's cameos in most Marvel films.